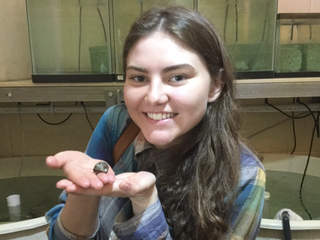 Tell us about your internship, co-op, or research opportunity, including your day-to-day responsibilities.

The magnificent ramshorn is North America's largest air-breathing freshwater snail endemic to two counties in North Carolina. It is believed to be extinct in the wild with only two captive populations in existence and is a candidate for listing under the Endangered Species Act. I have had the privilege of working on a plan to reintroduce the snail back into the wild. I started out reading everything there was to know about the snail. I summarized different methods of deciding where and how to reintroduce the snail into one document. I then spent a lot of time speaking with experts on what they thought would be the best method and worked with partner organizations to come to an agreement on what the next steps should be. I cultivated relationships with land managers in order to spread awareness about the snails status and to broaden the snails horizons as to where it could be released. More recently, I've been visiting potential reintroduction sites to decide if the water has just the right chemistry to move forward with testing water suitability on the snails. We've found a few spots, but this snail's a tricky one!

Describe the process of obtaining your position. When did you hear of the position and submit your application?

A professor sent out an email to all students majoring in GES at UMBC about the opportunity in mid-February. I actually had missed the original deadline, but luckily it was extended. I had applied to lots of positions before this one, and my resume had been reviewed by a lot of older friends that had already gone through the process. Of course I still ended up submitting my application at the very last moment, which is very stressful and I would not recommend it. I got a phone interview, and I immediately booked a practice interview with UMBC's Career Center. I asked to be recorded for future reference and I'm so glad I did. I never realized how overly self-deprecating I sounded and how bad my posture was in an effort to be non-threatening. Not only that, but they asked tough questions and gave me feedback on my answers and tips for thinking on the fly in the future. It definitely boosted my confidence for the interviews and helped me during the interview for this position. It's worth trying if you've never interviewed before.

What have you enjoyed the most about your position or organization?

If you love animals and ever want to make an impact, work for U.S. Fish and Wildlife Service. They are on the front lines of protecting species habitats and cultivating relationships with all kinds of people to make protecting biodiversity a universal issue.

How do you believe you have made an impact through your work?

I had a few people ask me this summer how I justify what I am trying to do. Most people wouldn't care about a snail going extinct because they're not especially cute and cuddly and they do not strictly speaking perform an obvious service for humans. But that's exactly why I've liked this position. I've gotten to give a voice to something that normally gets overlooked. Snail diversity is diminishing at a very fast rate from mostly human causes, and that's all I need to know. Even if a species function isn't obvious, it more often than not plays a role in its ecosystem that would lead to a reduction in ecosystem function without it. Except mosquitoes. Nobody likes them.

What advice would you give to another student who is seeking an internship or similar experience?

Never give up! I applied to sooo many positions, and got so many no's but all it takes is one yes!